Near the turn of the 20th century, Chatham County, Georgia, was experiencing a growth in population, and with it, an increase in crime. A shortage of manpower in existing police forces created a need for a County patrol force. This need triggered a group of prominent county citizens, led by Fred W. Osborn, to approach the Chatham County Commission on November 13, 1902, with a request that the commissioners “establish a County Patrol force for the Eighth District Georgia Militia.”

Even though the legislative and legal issues were resolved to create a county police force, it was not until September 25, 1912, that the Chatham County Police Department was established. On this date, bonds for county police officers were finalized and approved, and bids were placed for police uniforms and motorcycles. Six motorcycles were purchased: three Twin Harley-Davidsons and three Twin Indian machines. The Chatham County Police Department headquarters was located at the old Chatham County Jail on Habersham Street. Six men were sworn into the newly formed police department on October 1, 1912. These six men included Chief of Police, A. P. McFarland, Lieutenant, James H. McGrath, and officers Paschal M. Strong, H.E. Harley, James E. McBride, and W. O. Dotson. 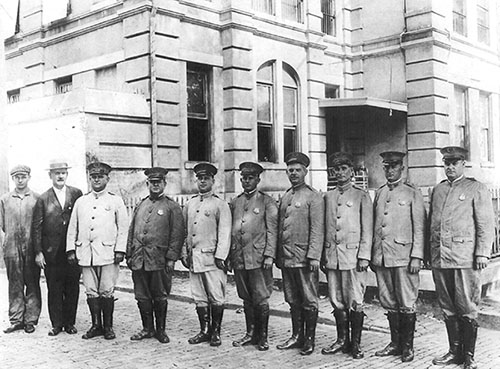 City of Savannah and Chatham County: A Joint Police Department

In 2003, both the Chatham County Board of Commissioners and the Savannah City Council voted to formally combine police efforts to eliminate duplication of services. After many years of hard work, on January 1, 2005, the Savannah-Chatham Metropolitan Police Department was a fully formed joint police power. In June of 2017, after 12 years of combined policing efforts from the Savannah-Chatham Metropolitan Police Department, Savannah City Council voted to end the contract for service effectively dissolving a joint police department.

Present and Future of the Chatham County Police Department